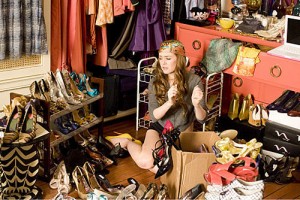 Compulsive shopping was recognised as a psychiatric disorder in the early 20th century.  Similar to the use of alcohol and drugs an individual will compulsively shop in an attempt to avoid their feelings and can occur when a person feels depressed, lonely and angry.  The “good feeling” is temporary as compulsive shopping and spending generally makes a person feel worse.

It is similar to other addictive behaviours and has some of the same characteristics as problem drinking (alcoholism), gambling and overeating addictions.  Shopping addicts become preoccupied with spending, and devote significant time and money to the activity.Compulsive shoppers will continue to overspend even when it is causing themselves or others distress. They may suffer a loss of control when engaging in shopping and may overspend more than they had intended leading to severe financial consequences as a result of their spending.

Do you often go on shopping binges?

Do you often feel guilt after spending too much?

Do you often hide purchases from family and friends?

Have you used money that you do not have (credit cards or theft) in order to fund your compulsive shopping?

Do you own clothes and possessions with the price tags still attached which have never been used?

Do you feel compelled to shop?

Do you often feel a “rush” when spending?

This is by no means a definitive list, but if you identify yourself as having one or more of these symptoms please do contact me and we can discuss ways in which to help you with your compulsive shopping.